The Asantehene, Otumfuo Osei Tutu II on Sunday met a large number of mourners on his way to Koforidua, the Eastern Regional capital to mourn with the New Juabenman over the demise of the Paramount Chief and Queen mother.

At he entered through Suhyen before Koforidua, the residents besieged the roadside to welcome him, and a sheep was slaughtered to purify his entry to the town.

Otumfuo attended the wake keeping of the late Daasebre Professor Emeritus Oti Boateng and the late Queen Mother Nana Yaa Daani at the New Juaben at Yiadom and Hwidie Palace around 6pm where he was surrounded by scores of people at the funeral grounds. 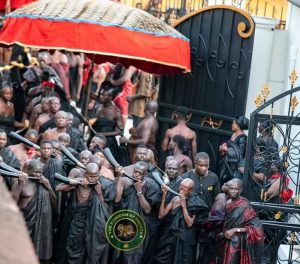 Asantehene’s entry was met by the singing of Asante appellations amid wild cheers from the scores of people who wanted to catch a glimpse of him for the first time.

Otumfuo Osei Tutu II was welcomed by the Juabenhene, Nana Otuo Siriboe II at the Palace and sat in state at the Yiadom and Hwidie Palace were various traditional rulers and other dignitaries paid homage to him.

Today (Monday) which is the grand funeral, Otumfuo will delegate Kumawuhene, Barimah Sarfo Tweneboa Kodua to represent him at the Doteyie. 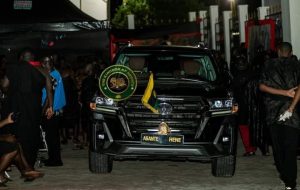 The Asantehene will attend the main funeral, which is yet to be planned after a new Paramount Chief has been installed by the Omanhene of Old Juaben Nana Otuo Siriboe II who is the brother of the late Daasebre Oti Booteng